Posted on November 15, 2015 by greatplainstrail

One of the cool things (among a list of many cool things) about long distance trails is the tradition of having a “trail name.”  It probably started somewhere along the Appalachian Trail.  I don’t really know.  If anyone out there has some solid history on this, please post it in the comments.  Anyway, I think trail names, like any nickname, are awesome.  There is something about a nickname that makes you feel like you’re a part of something, like you belong.  Trail names, like nicknames, cannot be chosen, of course; they have to be given.  I should know.  I’ve been given quite a few of them in my time.  Here is a partial chronological list of nicknames I’ve had (and continue to own proudly – they’re not really something you can ever get rid of).

The author as Dook.

Dook  – It rhymes with “book” and “look” as opposed to “spook.”  It’s a childhood nickname given to me by my father, who himself has carried the lifetime nickname of “Buzz,” despite his real name being Raymond.  This is how he knows instantly when a telemarketer is on the other end of the line.  Anyone who knows him, calls him Buzz.

Ernie Grunfeld playing for the Knicks.

Ernie – A name given to me in high school by some of my friends on the basketball team.  My mediocre play inspired them to compare me to an NBA player from the 1980s named Ernie Grunfeld.  Never heard of him?  Let’s just say he wasn’t exactly Michael Jordan, or “Air Jordan,” if you prefer his nickname. 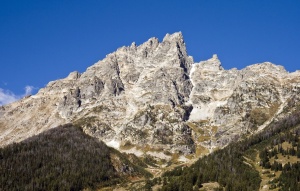 Teewinot – Given to me by my friends while working in Grand Teton National Park.  This one is harder to explain, but I believe it is because I was seen as a little brother figure to another friend of ours nicknamed “Teton.”  Teewinot is a smaller mountain than the Grand Teton, and thus like a little brother.

Which brings me to my Great Plains Trail trail name, which is “Old Uncle Joe.”  After staggering into camp after a long day.  My friend, and fellow GPTA Board member, Kevin started to sing a snippet of the theme song from the old TV show, Petticoat Junction, which goes, “There’s Old Uncle Joe, he’s moving pretty slow . . .”

Like all of my names, I wear it with extreme pride.