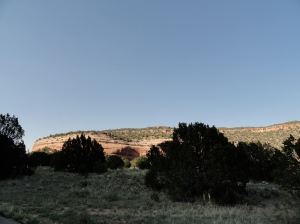 The Canadian River Canyon at sunset

We’ll finish the work week with a look at Kiowa National Grassland in New Mexico.  I visited Kiowa NG for the first time last year, and I was totally blown away, particularly by the western unit and the Canadian River Canyon (a.k.a. Mills Canyon) which is one of the finest redrock canyons I’ve ever seen.  It easily rivals better known red rock areas such as Sedona, AZ or Arches in Utah, although admittedly on a somewhat smaller scale.  Having the GPT pass through this fine canyon is a worthy goal, and one that the Great Plains Trail Alliance is working toward.

As mentioned, the western unit’s main attraction is the 700 foot deep Canadian River Canyon with its red rock walls and abundant wildlife.  The eastern unit is more open and contains a short section of usable trail that was once part of the Santa Fe Trail.  Kiowa NG is in a relatively unpopulated area and is not heavily traveled, but a visit is certainly well worth the effort!