Goin’ to the Dance

Posted on March 13, 2012 by greatplainstrail

I love basketball.  I grew up playing it, but now I’m just a big fan, particularly of the college game.  So just for fun, I couldn’t help but notice, pleasantly, that this year’s NCAA Men’s Basketball Tournament contained a fair number of teams with ties to the Great Plains.  First of all, there are nine “state schools” that hail from true Great Plains states:

Secondly, there are three schools which don’t contain the state’s name, but can also be found in true Great Plains states:

Next, there are two schools that, although further east and out of the short grass prairies, are still definitely from prairie states:

The next two teams are both from prairie states but are generally pretty far to the east.  We have Wisconsin and St. Louis.  St. Louis surely gets a pass as the historical “gateway to the West.”

OK, the last school is a stretch.  It’s Lamar University playing one of the play-in games.  Lamar University is in Texas, but it’s east Texas (Houston area to be exact).  Not exactly Great Plains material, but since they just squeaked into the tournament, I say they can just squeak into this list as well.

Altogether, that’s 17 teams or exactly 25% of the field of 68.  Not bad.  Also, there will be first and second round West Regional games played in Omaha, Nebraska.  So pick your teams, fill your bracket, and sit back to watch some exciting basketball.  And while you’re at it, go ahead and root for some teams from the Great Plains! 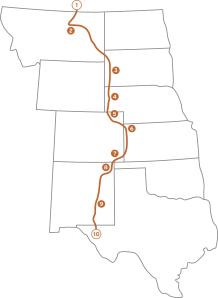 Building the Great Plains Trail.
View all posts by greatplainstrail →
This entry was posted in Uncategorized and tagged basketball, NCAA Tournament. Bookmark the permalink.